May 03, 2015
A reverse proxy such as NGINX or Apache seems to be a common feature of many systems, yet they often lack the tests associated with the business logic in the application(s) it proxies.  Here I will show how, with the benefit of Docker and WireMock, to write tests that verify your config in isolation.

Without tests for a reverse proxy, bugs are found on deployment in a real environment with some other unrelated suite of acceptance tests failing.  This has many drawbacks:

Test your proxy in isolation, end to end, using WireMock and Docker.

Docker allows us to build and run the proxy in a reliable and repeatable way.  WireMock allows us to start a mocked application server that the proxy (NGINX in this example) forwards requests to. 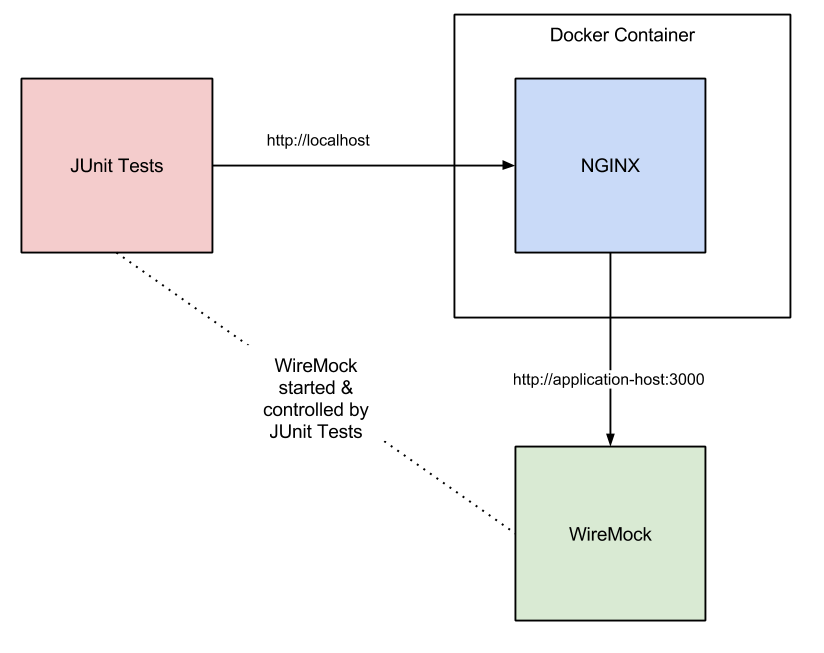 February 09, 2014
We recently encountered a connection leak with one of our services in production.  Here's what happened, what we did and the lessons learned... Tests and Monitoring detected the issue (silently) Our automated tests (which run in production for this service) started failing soon after the incident occurred.  We didn't immediately realise since they just went red on the dashboard and we just carried on about our business.  Our monitoring detected the issue immediately and also went red but crucially didn't email us due to an environment specific config issue. The alarm is raised A tester on the team realises that the tests had been failing for some time (some time being 4 hours... eek!) and gets us to start investigating. Myself and another dev quickly looked into what was going on with our poorly  dropwizard  app.  We could see from the monitoring dashboard that the application's health check page was in error.  Viewing the page showed us that a downstream ser
Read more

We recently looked at replacing our legacy session management system with a new one.  During this analysis, we came close to choosing a client side session but eventually concluded server side was better for us.  Here's why... Client side session In this model, all session state is stored in the client in a cookie.  The benefits of this are you don't need to worry about persisting and replicating state across nodes, session validation is lightning fast since you don't need to query any data store which means it's super scalable.  The session cookie must obviously be tamper proof (to prevent people creating a session of their choice) which is achieved by signing the cookie using asymmetric cryptography. The signing of a cookie value uses the private key, the validation uses the corresponding public key.  Our idea was to try and keep the private key as private as possible by storing it in memory only.  Each node (4 shown below) would create a new private and public
Read more

February 16, 2015
Recently I needed a docker container to access a service running on the parent host.  A lot of the examples on the internet were very close to what I needed, but not quite. First off, docker's documentation provided an example that (as far as I can see) doesn't actually work.  The following (I think) is meant to inject the src ip address of the parent host's default interface: $ alias hostip="ip route show 0.0.0.0/0 | grep -Eo 'via \S+' | awk '{ print \$2 }'" $ docker run  --add-host=docker:$(hostip) --rm -it debian What it actually does is inject the ip of the default gateway on the parent host which doesn't help us. Michael Hamrah 's blog details the " gateway approach " of getting the parent's host ip from within the docker container.  This works great, although I wanted to inject the ip on container run and not have that logic within my docker image. Inject the src ip of the docker interface I think the best
Read more