June 30, 2018
In my previous blog post, I discussed the efficiency of polling compared to WebSockets for a web application.  Using these two different implementations and performance tests, I decided it would be interesting to perform some stress testing to see which solution can handle the most load.

All code on github here.  For details of the original problem and performance tests, see here

Let's increase the threads until it fails

Even with a low number of threads, occasionally I would encounter errors - most likely soon after the server had started in its new Docker container.  Therefore I decided to run each scenario three times and display all results.

Results - Some Errors from WebSocket implementation


What are the errors?


The JMeter test report showed me errors like the following example:

The operation lasted too long: It took 11,771 milliseconds, but should not have lasted longer than 11,000 milliseconds.

However crucially it didn't tell me which job ids were too slow.  My theory at this stage was that given the tests are very time sensitive - it's possible that one of the runs coincided with a GC run and delayed a few jobs.


Again, the WebSocket tests failed with errors indicating the client had to wait longer than the maximum timeout for a response.  The theory of a GC collection slowing down the performance doesn't explain why Polling was unaffected.  These errors seemed hard to explain so I decided to add some logging on the server in order to establish where the delays were coming from.


The logging revealed that the server was responding in a timely manner.  The log entries  below show that job with id ending "f2e34477fc57" had been sent over the WebSocket just one millisecond after it was marked as complete.

My next point of call was to try and add extra logging to the performance tests.  Sadly, there seemed no way to be able to do this with the JMeter-WebSocketSampler.  I tried adding a "Debug Post Processor" which wrote many variables to the JMeter console, however it didn't show any detail of the WebSocket response to determine which jobs were slow.

How to identify the slow responses - More logging


I realised that the logging above was before the session was closed and not after.  To log the "total" round trip time, each Job was given a create time as follows:


Then the following logging code was added:


Those eagle eyed may also realise that session.close(200) was replaced by session.close.  This was after I realised that the status_code does not relate to http status codes and was actually throwing an error stating org.eclipse.jetty.websocket.api.ProtocolException: Out of range close status code: 200.  I never could quite find what is a valid number until I looked into the implementation of session.close and found that it uses the status code of 1000 to indicate a non error scenario.  I'm still confused as to what these status codes represent so if anyone can point me in the direction of an explanation please do!

The output from this code was telling...

Jobs aren't completing quite as timely as I thought.  Above, we see a Job with a delay of 9,148ms but a start to finish time of 10,187ms which is a significant amount of time extra.  This example shouldn't be enough to make the JMeter client timeout but it does illustrate that the extra time could be coming from closing the session/connection.

Running the server within my IDE (InteliJ Idea) in debug mode, whilst JMeter sent it requests also revealed an interesting quirk.  Once the response of a completed job was sent to the client, if the server took a long time to close the connection, the test still passed.  However, the next request for that thread failed.  This would make debugging quite difficult since if the server was slow closing the connection for one job, it would actually be the next job created by the same JMeter thread that would error.


The above test scenario shows that as load increases, the socket implementation will start to get slower.  It seems that the extra time causing the test to fail is coming from opening and closing connections.

I experimented by removing the CPU and Memory constraints, which resulted in the problem going away.  This lead me to look at other stats available via docker's api including the throttling stats.


Polling uses three times the cpu but seems to only gets throttled fifty percent more.  In other words, it seems that the WebSocket implementation is being throttled proportionally more by Docker.

Stress Test Part 2 - Limiting the CPU by cores - not shares


Whilst reading more about docker throttling, I found another way to try and mimic an aws ec2 t2.micro spec on my laptop (which was the original goal).  You can specify a set of cores to allocate a docker container.  I changed my bash script as follows:

See my commit here.  This would limit the docker container to just one core.  Given my laptop has 8 cores, I expected to see similar performance.  However this change alone brought about an astonishing increase in throughput (and resulted in zero throttled periods).  Suddenly the scenarios I ran before with 60 threads gave 0 errors and the threads could be increased hugely as seen below. 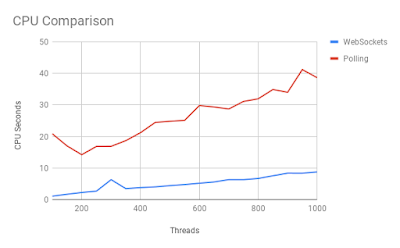 Apart from a few anomalies, the CPU seems to increase linearly as the number of JMeter Threads is increased.  The first polling run of 100 JMeter threads looks as if the JVM wasn't given enough of a warmup to optimise itself (or perhaps was busy optimising that it had to allocate more CPU resources).  This would suggest that WebSockets (at least for this scenario) are far more efficient than Polling in terms of CPU. 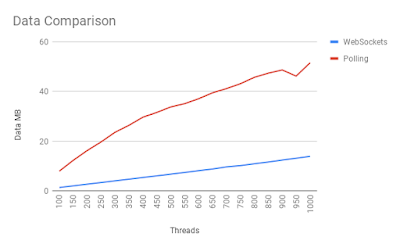 Like the CPU graph, the total data sent and received increases linearly until the Polling implementation suffers so many errors that the total throughput starts to decrease as a result of client threads waiting for responses. 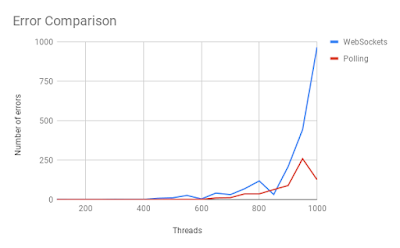 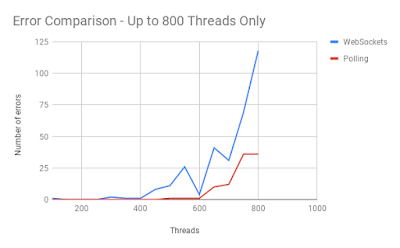 Removing the last few scenarios from the graph (before the WebSocket errors go completely sky high) reveals that even before the tipping point is exceeded for WebSockets, it was consistently failing more frequently than it's Polling counterpart.

What are the errors?

Most errors were due to the client not receiving a completed job after eleven seconds.  This is the reason for all errors in the polling and around ninety seven percent of the errors encountered with the WebSocket tests.  This would suggest that the server is so overloaded that the RXJava code doesn't get enough time to fire the events at the correct times to mark jobs as complete.  This same issue strangely effects the WebSocket variant more despite it consistently performing less CPU activity than the polling variant.  I have no explanation for this at present.

A small number of errors (around 3% of all errors) were encountered by the WebSocket JMeter tests as they waited for a connection to the server.

The WebSocket performance tests required more than 2GB of memory to prevent JMeter from failing with OutOfMemoryErrors!  This might suggest a memory leak in either my WebSocket test or the JMeter plugin used.

WebSockets can be far more efficient in terms of CPU resources and data sent/received.  The figures and graphs shown above are obviously only relevant to my one hypothetical scenario.  The following factors will obviously contribute to how much CPU and data is saved when comparing the two implementations:

Whilst the benefits of a WebSocket implementation are clear to see in the above graphs, so to are the errors.  Both solutions suffer when the server is "stressed", but the WebSocket implementation seems to degrade earlier and faster with my example.  Doubtless these service degradation issues could be addressed with tweaks, monitoring and auto-scaling.

February 09, 2014
We recently encountered a connection leak with one of our services in production.  Here's what happened, what we did and the lessons learned...


Tests and Monitoring detected the issue (silently) Our automated tests (which run in production for this service) started failing soon after the incident occurred.  We didn't immediately realise since they just went red on the dashboard and we just carried on about our business.  Our monitoring detected the issue immediately and also went red but crucially didn't email us due to an environment specific config issue.

The alarm is raised A tester on the team realises that the tests had been failing for some time (some time being 4 hours... eek!) and gets us to start investigating.

Myself and another dev quickly looked into what was going on with our poorly dropwizard app.  We could see from the monitoring dashboard that the application's health check page was in error.  Viewing the page showed us that a downstream service (being ca…
Read more

We recently looked at replacing our legacy session management system with a new one.  During this analysis, we came close to choosing a client side session but eventually concluded server side was better for us.  Here's why...

Client side session
In this model, all session state is stored in the client in a cookie.  The benefits of this are you don't need to worry about persisting and replicating state across nodes, session validation is lightning fast since you don't need to query any data store which means it's super scalable.  The session cookie must obviously be tamper proof (to prevent people creating a session of their choice) which is achieved by signing the cookie using asymmetric cryptography.

The signing of a cookie value uses the private key, the validation uses the corresponding public key.  Our idea was to try and keep the private key as private as possible by storing it in memory only.  Each node (4 shown below) would create a new private and public key o…
Read more

February 16, 2015
Recently I needed a docker container to access a service running on the parent host.  A lot of the examples on the internet were very close to what I needed, but not quite.

First off, docker's documentation provided an example that (as far as I can see) doesn't actually work.  The following (I think) is meant to inject the src ip address of the parent host's default interface:

What it actually does is inject the ip of the default gateway on the parent host which doesn't help us.

Michael Hamrah's blog details the "gateway approach" of getting the parent's host ip from within the docker container.  This works great, although I wanted to inject the ip on container run and not have that logic within my docker image.